Salaci Daniel, General Manager, is a geodetic (surveyor) engineer by profession with over 16 years of professional experience and with more than 12 years of managerial experience.

Salaci Daniel owns the Certificate of Authorization A.N.C.P.I. category D, the highest A.N.C.P.I. authorization for an individual, which allows not only to execute any kind of specialized work in the field of cadastre, geodesy and cartography, but also to verify such work.

Since 2004 he has been acting as a company manager in charge with up to the 40 employees. During this time he’s been directly supervising the field operational teams, as well as the office teams involved in the execution of different projects both for public and private entities such as:

Salaci Simona, Deputy Manager, is an economist by profession with over 18 years of professional experience, out of which at least 15 years experience as procurement specialist in Projects co-financed by World Bank, both in Romania and abroad.

Working both in public and in the private sector, mainly in implementing complex projects for periods of several years, Simona Salacia has acquired over time a very good experience in project management, as well as excellent communication skills both with staff of public institutions, including management level, and representatives of private companies.

Between 2012-2014, she worked as international procurement consultant for Customs Development Project implemented by the Customs Control Committee of the Republic of Kazakhstan, during which she was responsible for organizing and carrying out the Project’s procurement procedures according to World Bank regulations.

In 2011 Simona Salaci worked as an independent consultant with various private companies in Romania, offering consulting services both for preparation of bids and participation in the bidding process, and for planning the services delivery during implementation.

Between 1998 and 2010, worked as a procurement specialist under „General Cadastre and Land Registration Project” and „C.E.S.A.R. Project” both projects implemented by the National Agency of Cadastre and Land Registration, during which she contributed to the achievement of major projects such as:  the information system eTerra, conversion format of property titles, conversion to digital format of the land books from Bucharest, start of the general cadastre works in Romania etc. 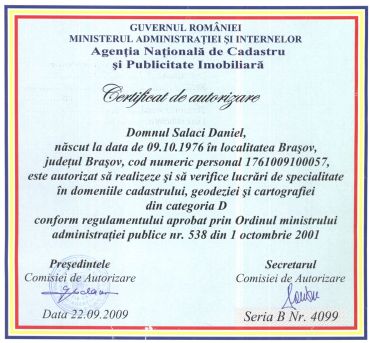 Salaci Simona – Director Adjunct
The company always maintains a strong team of geodetic engineers, most holders of certificates of authorization issued by A.N.C.P.I./ O.C.P.I. categories D, A, B and C.